Synopsis: Jess’ world changed forever when an outbreak of an unknown, uncurable virus wiped out her family. Since then she’s been traveling, looking for the ever elusive Promise Land she’d heard of years ago. A place of peace and plenty, that’s all she wants. Traveling with Aaron, Mollie, and Charlie she’s had great struggles and even greater losses.
In the third and final chapter of the Broken Earth series by award nominated bestselling author Lee Ryder, when life and death hang in the balance…only the strong survive.

🔥Blurb🔥
A new career, a new place, and a new man—you’d think after the rough year she’s had, Isla has finally found her stride. Of course it’s never that simple. Some dreams she is building, some dreams are taken away before they have a chance to form. But she never imagined that the one thing she’s worked so hard to realize, could be the cause it all breaks apart.

Ben doesn’t miss his assignments, his life of deceit, or his unsavory associations—but they appear to miss him. Just as he’s beginning to think perhaps there’s redemption for him after all, his dark past casts a long shadow.—and not just on him, but on the woman who made him believe.

This #ReleaseBlitz is hosted by #EnticingJourneyBookPromotions 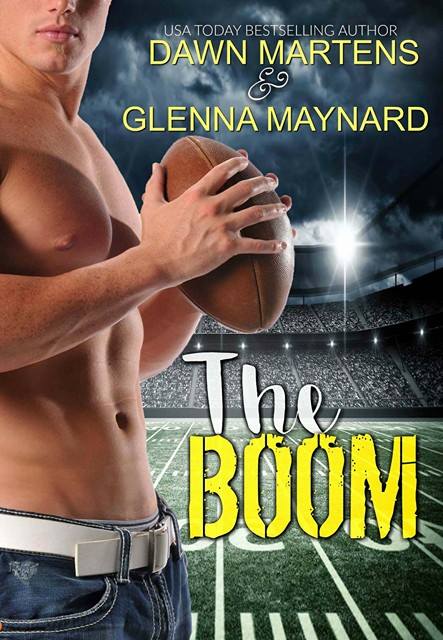 Blurb:
Amaya Maxwell only has one goal in life–dancing for a premier ballet company. She doesn’t date and she definitely doesn’t date jocks. In her eyes, they are all cheaters. However, when sexy quarterback Tate King and his reputation are thrust into her life, she finds herself falling fast and hard.
Tate King has one thing on his mind, getting drafted for the NFL. When an injury takes him out of the game and onto the dance floor of a feisty ballerina, he isn’t expecting to fall in love. Tate doesn’t do relationships, or at least he didn’t until Amaya hit him with the boom… 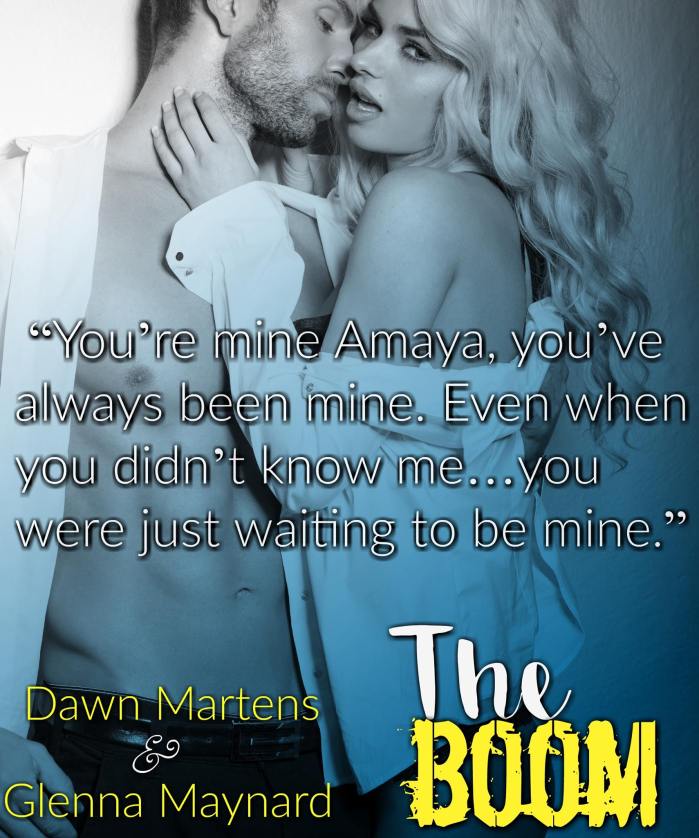 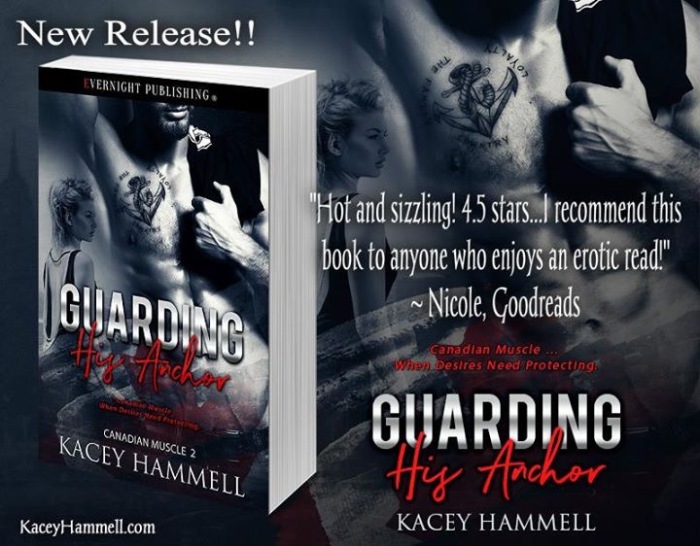 Good morning readers!
Thanks for having me crash your world today and celebrate my new release, Guarding His Anchor. I had so much fun writing this story. Frank really cracked open my heart and left me breathless.
I hope you enjoy him – and his lady, Charlie – as much as I did writing their story.
Happy reading!
Kacey

Series: Canadian Muscle (Book 2)
Genre: Contemporary/Suspense/Erotic Romance
W.C.: 57,400 Warning: Includes biting (Odaxelagnia) during sex
ISBN: 978-1-77339-185-4
Release Date: February 21, 2017
Publisher: Evernight Publishing
Canadian Muscle …
When Desires Need Protecting.
Charlotte Weber is no stranger to heartbreak. FBI agent Frank Shaw has swept in and out of her life as though she’s a revolving door, stomping on her heart in the process. Now that she’s finally had enough, he’s back again and seems determined to spin her life out of control.

Frank knows Charlie is the anchor for his lost soul, even though he can’t risk settling down. The demons of his past are too great, and he won’t run the risk of hurting her. This time, his only objective should be locating Charlie’s brother, Sean. But Charlie’s a complication, and not just because she refuses to believe Sean is guilty.

As Frank and Charlie fight for what they believe in, they also try to resist their powerful connection. The future is unclear, but when danger surrounds them, they are each other’s only anchor.
Excerpt © Kacey Hammell, 2017
Charlie closed her eyes and leaned against the door. Tonight had resolved nothing. She’d tried to let Neal down easy, but everything she’d said had gone over his fucking head. Confusion rioted in her skull, throbbing non-stop.
A shift of movement caught her attention, startling her. She opened her eyes and lifted her head, standing tall, on the defense.
Oh, for crying out loud!
All she needed tonight was Frank Shaw in her house, staring at her with anger spitting fire from his eyeballs.
But there he was, eyeing her open collar and cleavage, fists bunched at his sides.
Frustration, sexual and otherwise thanks to him showing up when she least expected, curled around her like molten lava spilling from a volcano.
If he wanted a fight, he’d come to the right place.
“What the hell are you doing sneaking into my house?” she demanded, stomping toward him.
“Calm down. Vikki called, asked me to hang some fucking curtains. She said you were at the bar.”
“Can’t you think up a better excuse than that?”
His eyes roamed over her from head to toe. Damn that spark in his eyes when he gazed at her like that. Anger turned to potent hunger in seconds flat, watching her as if she were the prey and he the hunter … She swallowed hard.
“If I’d known you were home and … busy, I wouldn’t have bothered. Vikki said the back door was open.”
“I’ll talk to her about that.” Charlie sighed, then walked into the kitchen. “Her room is across the hall, last door on the right.”
Undeterred, he followed her. “Hot date, huh?”
“None of your business.” He was the very last person in the world she wanted to discuss Neal with.
He leaned on the island in the center of the room. “I guess Vikki wasn’t even aware you had a date tonight.”
No doubt Vikki didn’t cared anyway. She was Team Charlie and Frank, and Charlie wouldn’t be surprised if her pal had planned the whole thing. Hang curtains, indeed. At this time of night? Without running it past the owner, her roommate? Charlie suspected Vikki was up to no good.
“Doesn’t matter.” Charlie put the last of the wine in the fridge, grabbed a cloth, and cleaned the counters. “You can do it tomorrow when I’m at work. Good-night.” Focused on one spot, she scrubbed hard, hoping he’d take the suggestion.
“You look beautiful.” His soft comment skimmed along her ear as he moved in behind her.
“Frank, don’t. I just had another guy here, for heaven’s sake.”
“Doesn’t matter. It sure didn’t end the way he thought. I know when you’ve been fucked good and satisfied and when you’re not.”

Mom of three, Kacey lives her own happily ever after with her perfect hero in Ontario, Canada.
Readers can find all my titles on my website – http://www.kaceyhammell.com
Please consider following me on
Twitter – http://bit.ly/2cYpPM4
Facebook — http://bit.ly/2dGHCvy
Facebook Reader Group – http://bit.ly/1R7Klci
And sign up for my newsletter – http://eepurl.com/cA3VSL

by K. Webster
Publication Date: March 30, 2017
Genres: Taboo Hotness
***Two novellas for the price of one and available for free in Kindle Unlimited***

He’s old enough to be her father.
She’s his best friend’s daughter.
Their connection is off the charts.
And so very, very wrong.
This can’t happen.
Oh, but it already is…

He’s the law and follows the rules.
She’s wild and out of control.
His daughter’s best friend is trouble.
And he wants to punish her…
with his teeth.

WARNING: These novellas are extremely hot and jam packed with insta-love. They’re MAJORLY taboo so if you have triggers about age and deviant acts, please don’t read this. I can’t be held responsible for corrupting you. If you have a taste for all things naughty, then you’re going to devour these taboo treats!

Her other passions besides writing include reading and graphic design. K can always be found in front of her computer chasing her next idea and taking action. She looks forward to the day when she will see one of her titles on the big screen.

Available on Kindle Unlimited!! ( Once it runs out on there, 3 months, it will be available on all sites)

Thirty-year-old Jared Beckett has always lived his life unconsciously, contemptuously, single-handedly, and on his own terms, not caring what people think of him, or thinking much of the people who do care. Nearly 14 years after he said goodbye, Jared has returned to his hometown of Annapolis for the summer, as well as To his dark memories. However, with a new light illuminating them, revelations about a covert friendship are revealed, and his secretive nature and progressing resentment deteriorates any relationships he has left. Will he become even more entrenched in his acrimony or is there one person who can bring down his walls, unlock Jared Beckett’s unconscious heart, and revive him before it’s too late for both of them?

#FREE! 230 5-star Amazon reviews. Book 1 in a captivating Paranormal Romance series. Be careful, you could get hooked!

Blurb:
Weston College freshman Leesa Nyland has been fascinated by vampires since she was three years old. That’s when her mom started acting weird, insisting sunlight hurt her skin because she’d been bitten by a one-fanged vampire.
But fascinated doesn’t mean Leesa believes. Any more than she believes in blue fire, people who live for centuries, and kisses that can kill. But when her beloved older brother suddenly disappears, she is forced to consider all these and more. She also has to figure out what to do about her mysterious new boyfriend. She knows Rave likes her a lot–so why won’t he kiss her?
As Leesa draws closer to finding her brother, she faces some gut-wrenching decisions. Should she risk her mom’s life trying to “cure” her? Should she continue seeing Rave, after he reveals his dangerous secret? And most terrifying of all, should she make the ultimate sacrifice-give up her
her brother?

Check out the latest book in this royal romance by Xavier Neal! 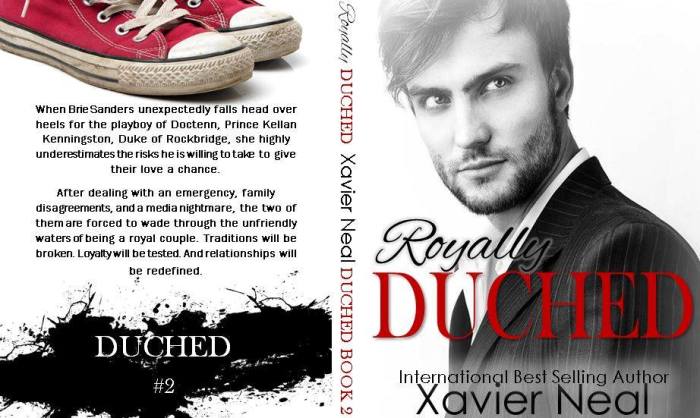 When Brie Sanders unexpectedly falls head over heels for the playboy of Doctenn, Prince Kellan Kenningston, Duke of Rockbridge, she highly underestimates the risks he is willing to take to give their love a chance.

After dealing with an emergency, family disagreements, and a media nightmare, the two of them are forced to wade through the unfriendly waters of being a royal couple.

Traditions will be broken. Loyalty will be tested. And relationships will be redefined.

*This is book 2 in the trilogy* 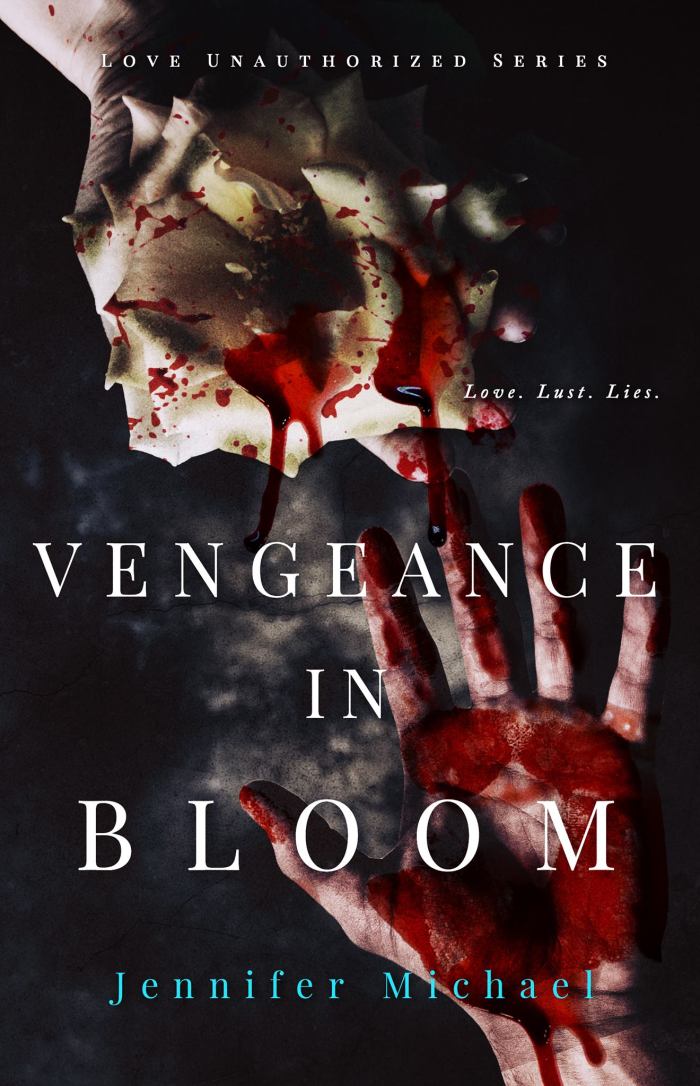 BLURB:
Vengeance is sweet.
Collateral damage is inevitable in a game of revenge.
Loyalty is gone, and hearts have been shattered.
Paisley and Burke now face the aftermath of deceit, but can they do so together or will their love be a casualty?